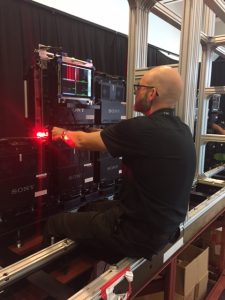 Pan-European, Independent Cinema Support brand Veritek says that it is likely to be the first Cinema Support brand in the world to install Direct View Displays.
Working on behalf of Sony, Veritek engineers recently installed Sony’s C-LED technology at the International Broadcast show in Amsterdam (see reports elsewhere in this issue) and for the recent FNCF Congress in Deauville, France.
James Salamon, Veritek’s Head of Business Development commented: “While we believe the commercial viability of direct view displays within cinemas is still some years away, we are really excited to be working with Sony with this technology.

The recent installations required great planning and execution, and the engineers had to ensure the panels were aligned with pixel perfection. The displays caused quite a stir at both events and it was hugely satisfying to watch
people stop in their footsteps and take pictures of the displays!”

Veritek are now involved in another full commercial installation in Germany and expect more to follow, but say that these are more likely to be for automotive manufacturer end users, rather than cinemas at this stage.